Effective June 1, 2022, the rates in Ohio will change. Please click on the button below to view rates for new enrollees with initial plan effective dates of June 1, 2022 to May 1, 2023.

Member Billing Information
Updated billing materials will be sent to members in the Spring and will include:

New Ohio Enrollment Kits will be available on the Sales Materials Portal in June. This is to account for upcoming application changes. Please use LEAN for plan availability, rate and discount information and continue to check your email for new kit availability.

You may continue to use the current Enrollment Kit for plan effective dates of June 1, 2022 and later until the new 2022 Kit is available. Please refer to the new rate pages attached to this email or populated in LEAN when using the current kit for effective dates beyond June 1st.

Helpful Resources
On Learning Lab within Jarvis, you can find AARP Medicare Supplement Plan guides, job aids, and trainings that are offered monthly and cover a variety of topics. Spots for each training session are limited, so be sure to sign up early.

What Is a QR Code?
Have you ever seen a poster that had a jumbled-looking, square-shaped barcode printed on it? These unique squiggles make up a QR code. A QR code (Quick Response code) is an interactive link that you can scan with your smartphone. The link could take you to a website, start a file download, or open an app on your phone to take an action, like adding an event to your calendar. QR codes are fun, easy, and alluring because they can be placed on anything from business cards to a bag of chips.

How Can Cybercriminals Use QR Codes?
Unfortunately, since a QR code is nothing more than a fancy-looking link, cybercriminals can use them just like they would use a link in a phishing email. There are many free websites that allow you to create your own QR code that links to anything you choose. This means that the bad guys can create a QR code that links to a malicious website or downloads malware onto your device. Once they have created their malicious QR code, it can be emailed, posted to social media, printed out on flyers, or even made into stickers and placed on top of legitimate QR codes.

Tips to Safely Use QR Codes:
A Follow these tips to stay safe when scanning QR codes.

• Never scan a QR code from an unknown or untrustworthy source. Did you receive a random, anonymous flyer claiming you could win the latest iPhone if you scan the code? Don’t trust it!
• When scanning a QR code, be sure to use a scanner app that provides a preview of the destination. This feature gives you a chance to review the URL and decide if the QR code is safe.
• If you scan a QR code and the URL looks cryptic, or the website requires a login, or the site is unrelated to what you scanned, close out of your browser immediately.

The agency “is looking at that, and is still going through the process,” spokeswoman Beth Lynk said of a potential reduction in premiums, as Medicare announced its final coverage decision for Aduhelm, a drug whose benefits have been widely questioned in the medical community.

Officials said Medicare will keep coverage restrictions imposed earlier on the $28,000-a-year medication, paying for Aduhelm only when it’s used in clinical trials approved by the Food and Drug Administration or the National Institutes of Health.

The projected cost of Aduhelm was a major driver behind a $22 increase in Medicare’s Part B premium this year, boosting it to $170.10 a month. That price hike is already being paid by more than 56 million Medicare recipients signed up for the program’s outpatient coverage benefit. Lawmakers have called for a rollback and Health and Human Services Secretary Xavier Becerra already directed Medicare to reassess.

Thursday’s coverage decision illustrates the impact that a single medication can have on the budgets of individuals and taxpayers. It comes as legislation to authorize Medicare to negotiate prescription drug prices remains stuck in the Senate, part of President Joe Biden’s stalled social and climate agenda.

That’s left Democrats with nothing to show on their midterm election-year promises to cut prescription drug costs, unless they can overcome internal disagreements. Most Medicare recipients have their premiums deducted from their monthly Social Security checks. And despite a big cost-of-living increase, they’re feeling the bite of inflation.

Medicare’s determination on Aduhelm included an important caveat. Officials said that if it or any other similar drug in its class were to receive what’s called “traditional” FDA approval, then Medicare would open up broader coverage for patients. Such approval is granted when a medication shows a clear clinical benefit.

That was not the case with Aduhelm. It received what’s known as “accelerated” approval last year because of its potential promise. But manufacturer Biogen is required to conduct a follow-up study to definitively answer whether Aduhelm truly slows the progression of Alzheimer’s. If that study is successful, FDA would grant full approval.

That would also open up Medicare coverage.

Dr. Lee Fleisher, chief medical officer of the Centers for Medicare & Medicaid Services, said “there will be quick access for Medicare beneficiaries” for Alzheimer’s drugs that receive the traditional FDA approval, after demonstrating a clear benefit.

Aduhelm hit the market as the first new Alzheimer’s medication in nearly two decades. Initially priced at $56,000 a year, it was expected to quickly become a blockbuster drug, generating billions for Cambridge, Mass.-based Biogen.

But although the company slashed the price in half — to $28,000 a year — Aduhelm’s rollout has been disastrous.

Pushback from politicians, physicians and insurers left the company with just $3 million in sales from Aduhelm last year. Doctors have been hesitant to prescribe it, given weak evidence that the drug slows the progression of Alzheimer’s. Insurers have blocked or restricted coverage over the drug’s high price tag and uncertain benefit.

The CMS decision means that for Medicare to pay, patients taking Aduhelm will have to be part of clinical trials to assess the drug’s safety and effectiveness in slowing the progression of early-stage dementia.

The limits stayed on despite a massive lobbying push by the Alzheimer’s Association to change Medicare’s position, including outreach to members of Congress, online advertising and social media campaigns directed at the agency.

The association, the largest group of its kind, has received contributions from drugmakers, including Biogen.

The group’s CEO said he was “very disappointed” after reviewing Medicare’s decision.

“Denying access to FDA-approved Alzheimer’s treatments is wrong,” Harry Johns said in a statement. “At no time in history has CMS imposed such drastic barriers to access FDA-approved treatments for people facing a fatal disease.”

Aduhelm has sparked controversy since the FDA approved it against the recommendation of outside advisers.

The medicine, administered intravenously in a doctor’s office, hasn’t been shown to reverse or significantly slow Alzheimer’s. But the FDA said its ability to reduce clumps of plaque in the brain is likely to slow dementia.

Many experts say there is little evidence to support that claim. And a federal watchdog and congressional investigators are conducting separate probes into how the FDA reviewed the medication.

Alzheimer’s is a progressive neurological disease with no known cure. The vast majority of U.S. patients are old enough to qualify for Medicare, which covers more than 60 million people, including those 65 and older, and disabled people under 65.

The reason Aduhelm falls under Medicare’s outpatient benefit, and not its pharmacy drug program, is that it’s given in a doctor’s office. Beneficiary premiums are set to cover about 25% of the cost of outpatient care.

WellCare is very excited to announce Centene Workbench is ready for YOU!

Step 1: Login to your Single Sign-On (SSO) portal with your existing credentials. If you are a new user, please follow the steps to create your account.

Helpful tip! The SSO portal works best in Google Chrome, Firefox, and Microsoft Edge. It is recommended to clear the browser cache prior to accessing the portal.

Key Changes or Enhancements to Know!

Portal Overview: Centene Workbench provides you with the tools to help you succeed. Key enhancements include, but are not limited to:

Please review the Centene Workbench Portal Guide for screen shots, step actions, and explanations of functionality to assist with navigating your portal.

PID to NPN Transition: The Wellcare 6-digit ID (PID) is being discontinued in phases and replaced with the National Producer Number (NPN). Please review the phased approach below: 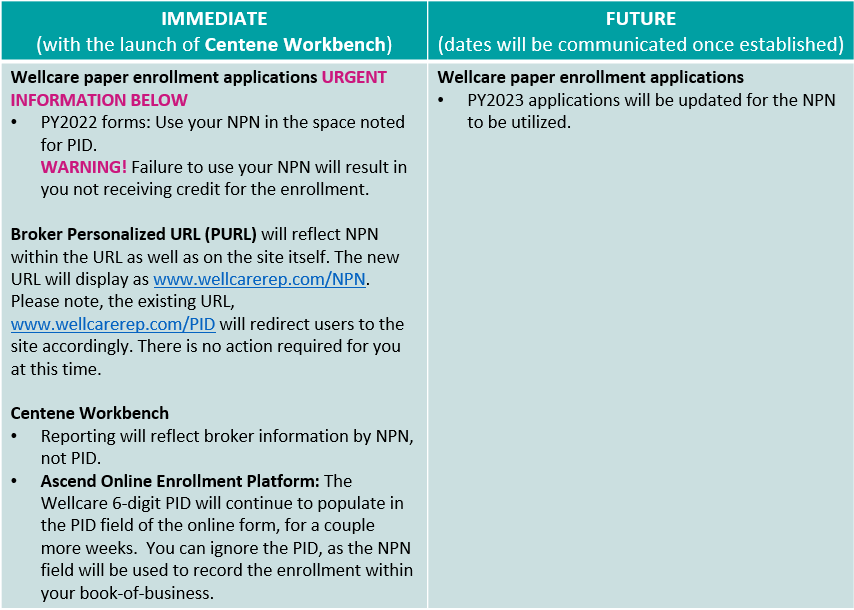 For more information or questions about the new portal, please contact your CSM Service Rep.

• All currently appointed agents with Lumico in these five states will automatically have access to Elips without any action required. Agents will receive an email confirmation during this time, but nothing is required to complete the process.
• Effective April 9, 2022, online contracting for Lumico will include only Elips Life.

Cornerstone Senior Marketing and the Lumico team continue to show their commitment to the Medicare Supplement space with refreshed rates in these five crucially important Medicare Supplement states.  If you need a refresher on all Lumico offerings, like the new security question signature or the enhanced Q2 agent marketing allowance, contact:

Mutual of Omaha has increased compensation on dental insurance sales!

When you sell a Mutual of Omaha dental insurance policy*, you’ll earn not one…not two…how about THREE “extras”:

Our two dental insurance products are competitively priced and are a perfect fit for your Medicare-eligible clients, many of whom may not have dental coverage.

Give your dental sales an extra boost this year by talking to your clients about Mutual of Omaha’s dental insurance solutions.
*Compensation increase applies to dental insurance applications dated on or after April 1, 2022

Here’s an extra benefit for your clients. Mutual of Omaha offers a 15% dental insurance discount when your clients buy dental and Med supp policies at the same time (discount varies by state; certain provisions apply).

Sourced from MMO communication on 3/31/22

We recently learned that we miscommunicated a plan feature during our broker training sessions and want to clarify. With the Access PPO plan, the out of network $2000 deductible will apply first, before out-of-network copays are applied.

We apologize for the inconvenience this miscommunication may have caused.

If you have any questions please contact your CSM representative for more information.